A few weeks ago, I went north for some school visits and to see the famous Finnish Lapland. When I say I went north, I actually mean about 4 hours north of the Arctic Circle! For a girl who normally flies south for April Spring Break in search of a nice warm island to stake claim to a little slice of beach for the week, going north was a new concept. There are many things about this trip that keep coming back to me and make me realize that the importance of this trip was and will be far greater than I imagined.

We spent some time in schools in two different towns- Inari and Ivalo. Both towns are small with Ivalo having a population of about 4,000 and Inari with about 6,000 people. Both towns are dependent on tourism and hosting people like me who want to hang out with reindeer, spend some time enjoying a husky ride and frequently check the sky for northern lights. Both towns are also working really hard at trying not only to preserve the Sámi culture, but also to decide what that means in the context of today’s world.

The Sámi people are the only indigenous people of the European Union. Since 1996, the Sámi have had the constitutional right to self-govern in the Sámi Homeland (much of Lapland) regarding language and culture. There are about 10,000 Sámi people living in Finland however over 60% of them live outside the Sámi Homeland. Traditional livelihoods include reindeer herding, fishing, hunting, agriculture and handicrafts (keep in mind they do all of this in some pretty harsh winter conditions!). Today it is very common to find Sámi combining traditional livelihoods with tourism and services. If you want to know more about the history of the Sámi people, read here and here. Laurie's research has been focused on how the Sámi are taught in schools and has found that in most cases they are a forgotten group of people. I have found in talking with students in both Jyväskylä and Helsinki, they know very little about the people who first inhabited their country. I decided to spend time in the Sámi Homeland so that I could get a better understanding of this group of people.

Our first school visit was with an incredibly kind and patient woman, Petra Kuuva. She teaches 7 students in pre-school, grades 1 and 2, in the Inari Sámi language. She showed us this picture as an example of a project she did with her students: 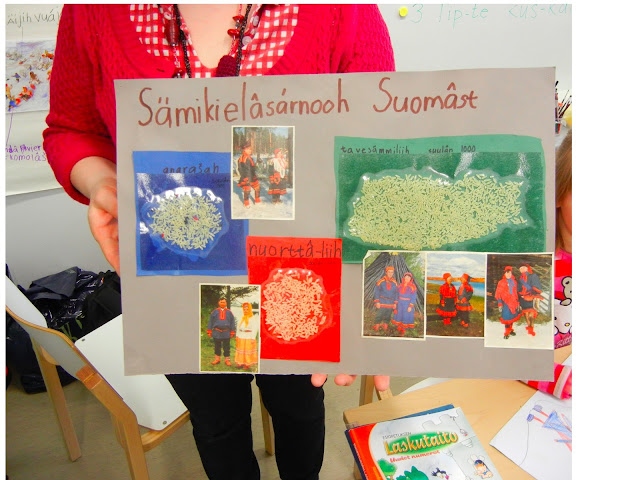 Each piece of rice represents a speaker of the different Sámi languages. The blue paper has about 300 grains of rice and represents the Inari Sámi speakers. The green paper represents the Northern Sámi speakers who total about 1000 in Finland (this language can also be found in Norway and Sweden) and the blue paper represent the 300 speakers of the Skolt Sámi language in Finland (also spoken in Russia). In one glance, I understood the uphill battle of keeping the Inari Sámi language alive and spoken in conversation not just at ceremonies or formal events. Each of the students in her class are Sámi, but not all of them have Inari Sámi spoken at home adding to the importance of this immersion to keeping the language alive.

Petra talked openly about having limited resources in the Inari Sámi language and having to create much of the material herself for the lessons. After spending the day with her, I have no doubt these children are in good hands and are proud of being Sámi. 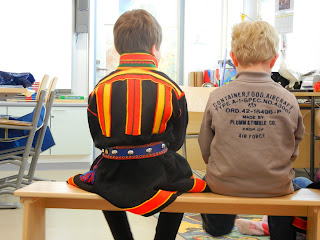 We got to spend an afternoon watching an artisan talk about her craft and how she “takes strength from the past” to pursue the things of her future. While I listened, Satu Natunun turned wool into felt and told the story of her people. She is a well traveled woman and is open to new ideas and people but finds that the “Sámi provides stability to her life.” She smiled when she said, “Sámi provides the flavor to her art.” I couldn’t help but smile too. Christine made this wonderful video that helps tell her story.

why I love Sami culture
(for some reason, you tube won't link to it with the video image- take time to watch! It's a good one :) 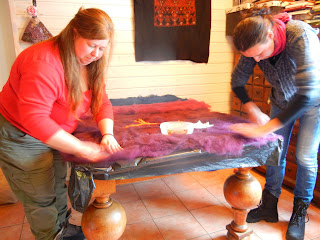 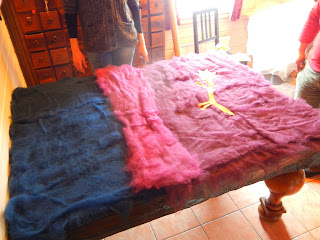 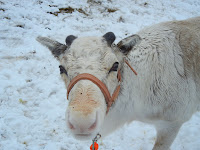 After I left Satu’s studio I kept coming back to the conversation we had about who is Sámi. Over the course of the next couple of days, we found ourselves in the middle of several conversations trying to answer this question. Spending the day at the Vocational School for traditional Sámi handicrafts and the next morning hanging out with a reindeer herder, it is clear that Sámi have had to adjust the way they teach their traditions and skills over time. Some elders don’t think that reindeer herding should be taught in schools, but should be taught through family and traditions. The Institute responded, by changing the structure of the school so students can learn in the many small villages around the area instead of forcing them to move to Inari to go to school. Teachers work closely with reindeer owners to ensure that students meet the requirements of the school and then have students demonstrate what they have learned to earn their certificate. Handicraft students struggle with whether to use traditional materials or easier more accessible modern materials. Maybe the most important part of this conversation is now to remain true to Sámi ways, when tourists are looking for a commercialized (and often cheaper) version. 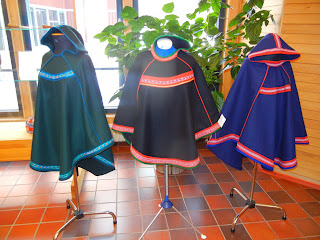 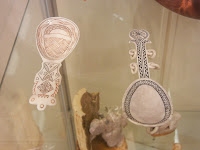 The high school students that we visited gave some insight into this dilemma. When asked if Sámi people should carry identification cards (like the American Indians do), the answer was no. If you speak the Sámi language and you have Sámi relatives, you are Sámi. Sounds simple. But then what if you aren’t Sámi and want to learn the language? 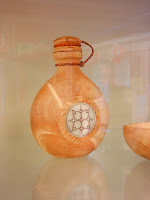 The son of a very famous Sámi artist (and a true artist himself) strongly believes you shouldn’t be allowed to, that it isn’t your culture. The tension between inclusion and exclusion is clearly present in this generation of Sámi. The question of sticking with the old ways or finding new ways to hold to traditions is something that continues to be wrestled with for all who are thinking about these issues. I have no doubt that this generation will take the advice of Satu and find comfort in the “strength of the past” as they begin to push their people into the future.

Another bonus of this trip is that I got to know Laurie better. At each school she gave a presentation about the Cherokee people, her people. With the added story of the Cherokee, I was able to make connections and think about the parallels and differences between the stories of the American Indian and the Sámi. These conversations will push me to give more time to the voice of indigenous people in my classroom. Plus, it was great to see the student’s reactions to Laurie and all the questions they had after her presentations.

I learned a new word while I was in Inari- baiki.  In Northern Sámi language it means, “the place where your heart is.” It is the name of the newspaper for the Sámi people in the States (you can read about it here). I really like the way this word resonates with me. My heart was moved by the people and students that we got to meet on this trip. Because of that, part of my heart will always be with the Sámi and I will always be grateful for the way they opened themselves and their culture to teach me. My heart will also be with Finnish Lapland. Although I wasn’t there in the middle of winter with the fells covered in snow, the beauty of this part of Finland is impossible to ignore. 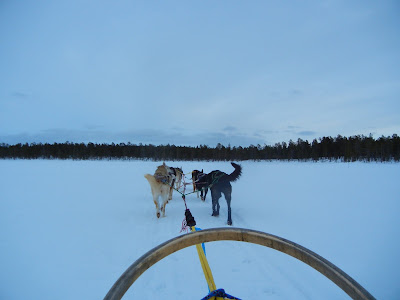 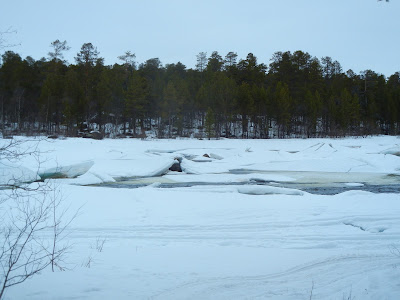