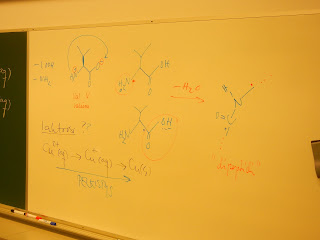 I had a chance to hang out in a chemistry classroom at Cygnaeus Lukio with an amazing teacher who has been teaching for 29 years. I was a little nervous going into this observation because I know next to nothing about chemistry and I know absolutely no Finnish. But I didn't want to miss the opportunity to be in a science classroom. This high school is the toughest one to get into in Jyväskylä and so I was excited to see what the hype was all about.

Side-note: After compulsory education (grades 1-9) students receive a score that is combined based on their grades from classes in grades 7-9. That score is then used when applying to either upper secondary schools or vocational schools. Each school has a certain score that you have to have to apply. The scores are from 4-10. The schools in Jyväskylä have a range from the top school (Cygnaeus Lukio) at 8.42 to Tikkakosken Lukio at 5.67.  The four schools in the middle are mostly in the 7-8 score range. I am working on getting into some of the lower ranked schools to find out what this really means. More to come later...hopefully! 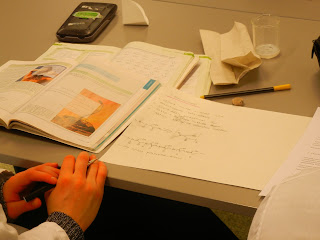 I think my greatest lesson from the observation had nothing to do with chemistry. Although the lesson was amazing- kids were working in groups and experimenting with chemicals and milk to create some sort of plastic (I warned you I don't know chemistry!). I realized how fun it is to hang out with students who are thinking!

This teacher didn't give answers, she gave hints.  Students learn from labs at least once a week and the class I observed had students from several different schools enrolled. They were paired together in groups and given limited instructions.  They were expected to have read the theories in the book prior to class and would be simply testing them to see if they are true while they were in class. The teacher only talked during 18% of this class. That means students were working, testing, talking, recording and testing again the majority of the class. I was lucky enough to sit with a group who was willing to try their hand at English while they completed the lab. I heard them drawing conclusions, using different methods to sove a problem, and listen to the different perspectives offered from the group members. I was amazed not only at the chemistry vocabulary they knew in English, but the ability to demonstrate their critical thinking skills in a second language.  I was impressed! 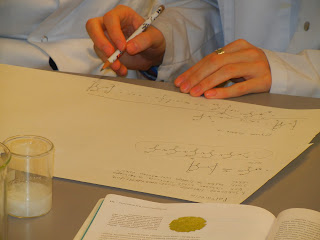 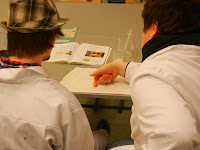 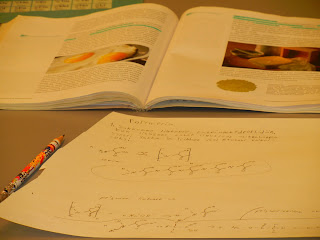 Each group was given a blank piece of paper, an eraser and the lab equipment. As they worked together, that eraser came out to work on theories and results to make sure to accurately record what they were finding out as a group. The teacher routinely laughed and enjoyed her class as they worked to reach conclusions. I don't need to know chemistry or Finnish to understand that these students were learning.
Posted by Karen at 5:33 AM